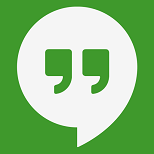 Google is expanding the services in multiple ways,now Google working on Google Hangouts that is the most accessible communicating chat panel for gmail users.Google Hangouts can connect the users with voice chat and video chat. Google hangouts are adding additional service for business users and Google apps enterprise users.Non Google+ users can also use Hangouts in specific locations to locate and communicate with other users.Google giving me support by phone and email support for enterprise customers.

Google schedule features update on 19th August.Google introducing video is going to update for the chrome users and while open the Google Hangout this features video option will pop for users notification.