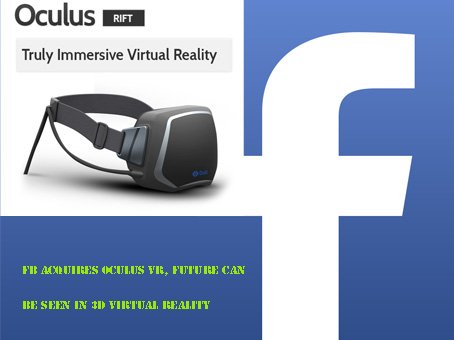 The World’s largest social network site Facebook seems to be in buying bash. After its recent product WhatsApp bought for $19billion.Again Facebook acquire the Oculus VR, which is the maker of virtual-reality headset for $2 billion dollars. Probably the social networking giant looks for a big future a head with this 3D virtual reality and the deal is going to be consummate by the end of second quarter. It consists cash of $400 million and 23.1 million shares of Facebook ,it is going to be the first hardware company to be bought by Facebook.

Mark Zuckerberg, CEO of Facebook said “Virtual-reality emerge as the next social and communications platform,” in a conference call with Tech analysts and electronic media. ”The history of our technology consists of new platforms for every 10 or 15 years.Facebook CEO Zuckerberg said “We’re making a long-term bet that immersive, virtual and augmented reality will become a part of people’s daily life.” Wearing an Oculus Rift was “different than anything I’ve ever experienced in my life.”

Zuckerberg said “that the main business drivers for company is software and services. Virtual reality headsets will be used as drive credits for anything from marketing to sales of virtual goods. Oculus VR has the benefits of expanding entities and he also expressed his plans of spreading the business in addition to gaming also wants to enter some fields like architecture, automobiles, marketing and education. ”Imagine just putting the goggles and enjoying various activities at a time such as gaming in the court and listening to classes and the teachers interacting with doctors face to face,” he added.